How hearing aids can save deafness 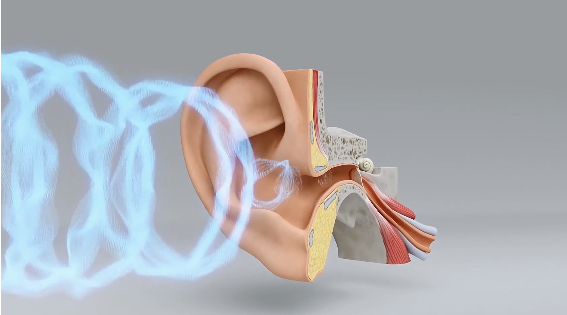 How hearing aids can save deafness

How does your ear hear the sound?

Sound, which is the sound wave generated by the vibration of the object, is collected by the auricle and introduced into the ear canal, causing the eardrum to vibrate.
The tympanic membrane is connected to three small ossicles. You can use the lever to amplify the sound and transmit the vibration to the cochlea through the oval window.
The lymph fluid in the cochlea will continue to conduct sound waves, twist the hair cells on the basement membrane, and release neurotransmitters to the auditory nerve, forming sounds in your brain.
Sounds of different frequencies are perceived by different positions of the cochlea.
However, such a delicately structured ear is actually a consumable. Today, 60 million elderly people in China have hearing impairments, and often rely on hearing aids to hear sound clearly.

The human ear can be divided into outer ear, middle ear, and inner ear with the tympanic membrane and oval window as the boundary.
When the outer ear becomes inflamed and narrowed, or the middle ear has hearing ossicle sclerosis and other diseases, it will affect the conduction of sound.
When there are diseases such as hair cells or auditory nerve damage in the inner ear, it will affect the perception of sound, which is called sensorineural hearing impairment.
The degree of hearing impairment can be measured with an audiometer.

First, the subject is required to put on headphones in a soundproof room. The audiometer outside will emit sound at a specific frequency and continue to increase the volume until the subject indicates that the sound can be heard. The volume at this time is called the listening threshold.
Measure the sound of different frequencies separately, and record the hearing threshold level of the subject to get an audiogram.
According to the standards of the World Health Organization, based on the average hearing threshold level of these four frequencies, it is possible to determine the degree of hearing impairment of patients, and mild to severe conductive or sensorineural hearing impairment can be improved by hearing aids.

The difference between them is mainly in the shape and size, but the working principle is the same, which is actually a loudspeaker.
Taking the behind-the-ear type as an example, the microphone can convert external sound into current, then increase the voltage through the amplifier, and then use the receiver to convert the current into sound and send it to the ear through the ear hook.

Among them, the potentiometer can adjust the current to control the volume of the output.
However, such hearing aids can only increase the same volume for sounds of different frequencies, and the effect is not good.

For example, elderly people’s hearing loss at high frequencies is often greater than low frequencies, increasing the same volume. Although high-frequency sounds can be heard, the volume at low frequencies will be too high, which will damage hearing.
To solve this problem, more advanced hearing aids have added a DSP-digital signal processor, which contains multiple independent circuit units, called “channels”, for processing sounds of different frequencies.

For example, a 4-channel hearing aid can be divided into 4 frequency bands, and the volume of each frequency band can be adjusted independently.
The greater the number of channels, the finer the sound processing and the more expensive it is.
Hearing aid adjustment requires the operation of a professional fitter.

In the same way, the same method is used for the voice of 65dB and 80dB.

The main purpose of fitting hearing aids is to allow patients to hear the sound in this area, that is, the frequency and volume range of speech.

Normal people can clearly hear the vowels and consonants and understand the semantics.

However, it is difficult to hear most of the high-frequency consonants in the middle-aged hearing impaired, which affects understanding, while the severe old-age hearing impaired is completely inaudible to others.

This block in language communication can cause brain function to deteriorate.

According to research, mild to severe hearing impairments are 2-5 times more likely to develop dementia than normal people.

Are there different styles of hearing aids?

How long does the hearing aid battery last?

Speech discrimination is poor-What should I pay attention to when wearing hearing aids?